Kabylia mountain’s, like a dyke, have largely preserved Kabyle culture, language and spirit through history, despite all the foreign conquest that have invaded Kabylia, and the other Amazigh lands of North Africa.

Unfortunately today this rampart is surpassed by the waves and the electromagnetic signals emanating from the hundreds of satellites, which invaded Kabyle’s space. Thus, all the other civilizations, languages ​​and cultures have found an audience in the very deep of the Kabylia heartland. Programs aimed at all categories of Kabyle society, slowly but surely, contribute in changing, if not completely wiping Kabyle culture and verb within its own society.

Our ancestors have resisted and succeeded through ages and with their own means in transmitting to us « Taqbaylit ». In today’s era of the Internet and commerce and culture globalization, the tools to preserve and develop Kabylian language and culture are technological.

Today, occupying the media and audio-visual space combined with an abundant cultural production is the minimum required to defend our language, culture and identity. For all these reasons we have taken the historic decision to launch a Television channel project whose mission is to promote and develop the Kabylian language and culture.

We also have the ambition to make this channel a space of freedom where ideas, creations and where a respectful debate will take place. In particular, we have the ambition to promote in our language science, technology and education programs as a  priority in order to contribute to the economic and cultural development of Kabylia.

TQ5 is a generalist television channel and a platform of choice to bring together the Kabyle people around its values. It’s a channel that will give a voice to all its diversity and act in the supreme interest of Taqvaylit. The aim is to create a « voice » of the people and a foundation of Kabyle television productions in order to make them accessible to all Kabyle audiences.

The TQ5 channel is not coincidental. This choice brings us back to a historical fact and a geographical reality.
First of all, the two letters TQ are about TaQbaylit. Then the number 5 refers to the Five Tribes that founded what is known today as « Tamurt n Yiqbayliyen ». Indeed, on the outskirts of Djurdjura, which the Romans called Mons Ferratus, or « iron mountain, » inhabited the Quinquégentiens in reference to a confederation of 5 Moorish tribes of antiquity which opposed Rome in Mauretania Eastern Caesarean towards the third century. The Quinquégentians lived precisely in the present Kabylia. The five also refer to the five continents where the Kabylian people live, whom we want to, reach by allowing them to have a permanent link with the country of their ancestors, Kabylia.

TQ5 serves the Kabylian culture; it’s exclusively distributed to its customers who are the Kabylian people wherever they are. It gives an expression and broadcasting access space to and promotes the participation of everyone.

TQ5 is useful, informative and educational because it is an instrument of popularization by offering the Kabylian people a space of expression, exchange and constructive debates. Its ambition is to bring them together while reflecting the diversity of their opinions.

TQ5 is a general-interest channel that offers a wide range of programms aimed at a wide audience, focusing on current affairs, culture, history, science, technology, sport and education. TQ5 has a responsibility and is committed to freedom of speech and respect for human dignity, the protection of children and youths, the authenticity of information, the quality and diversity of programs, the audiovisual production development and creation, and finally the defense and illustration of Kabyle language and culture. 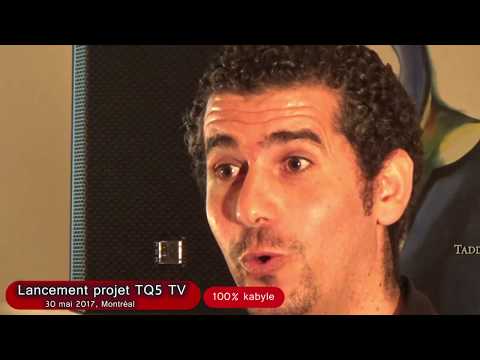